Doctor Who: A Christmas Carol on White Vinyl 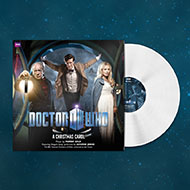 Here on vinyl for the first time is Murray Gold’s immaculately crafted original soundtrack to the 2010 Doctor Who Christmas Special.

Featuring opera diva Katherine Jenkins as Abigail Pettigrew, Matt Smith as the 11th Doctor, and Michael Gambon as Kazran Sardick, A Christmas Carol was the third most watched programme on December 25th 2010.

Katherine Jenkins’ special appearance was crowned with her performance of Abigail’s Song (Silence Is All You Know) on Side B, Track 14.